Luxury Villas in France for rent

Our handpicked collection of Luxury Villas in France for rent

Welcome to France! The place where 17 million British nationals go every year. Whether you are dreaming of Luxury villas in France for rent, Luxury Castles (Chateaux) to rent in with a private pool, restored French countryside houses to rent in France or Luxury manor houses, We have every luxury home you can dream of for your beautiful French Villa Holiday.

If it is a party villa in France you are after, then we can pick the best match for your needs, from stag and hen night parties to Villas excellent for celebrations such as a wedding venue castle or villa. If it is just a romantic escape, then let us guide you to best romantic getaway from Normandy to Burgundy, or a beach side French villa. Ask us to tailor your villa holiday in France and let us match your budget with some extras thrown into it. See our Chic collection of private French Chateaux and Villas in the following regions of France.

Browse our villas to rent in France

Luxury Villas in France for rent by region & things to do

Luxury villas in Normandy for rent

Rent a Luxury villa in Normandy with a pool. 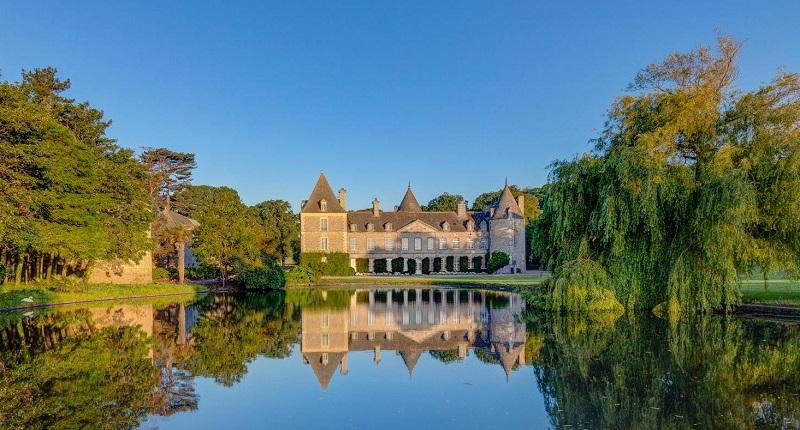 Normandy, Champagne, and Paris Region: with access to some of the best 20 Villas to rent in Normandy and Champagne, this region is the best way to experience north of France, including Paris. Charming and rural little villages with vineyards and historical tours or Pack the best of Paris into one experience, Go up the Eiffel Tower, marvel in medieval splendour at Notre-Dame Cathedral, meander Montmartre and its Sacré Cœur church, think of the Revolution at Place de la Concorde, get awe-struck by the Orsay Museum, study the Latin Quarter, find out about on Paris’s past at the Carnavalet Museum or sample the artistic high life at the Jacquemart-André Museum. If the museum is just too much then take a midnight Paris joyride in a classic car or savour the Parisian café scene.

Visit Normandy and explore the semi-timbered charm of Rouen, glimpse in on local artisans, take deep thoughts on Monet’s lily ponds in Giverny or taste the finest of Normandy cuisine. Don’t miss on the D-Day beaches or the hike with travellers to the delightful island abbey of Mont St-Michel.

Find out what to see or do in Normandy.

If you fancy a drive further, explore the wine regions of France, a good tip is to drive up Alsace’s Route du Vin, where you will explore for miles of vineyards, half-timbered villages, and medieval fortresses. Then head to Verdun to walk the ditches of World War I prior to visiting Reims, then a final stop in Epernay, the birthplace of champagne. If you wondering where to stay stay during your Champagne experience tours, skip the hotels and rent a Luxury villa in Champagne or nearby, and make yourself feel home like a local.

Read more on what to see or do in champagne.

Rent luxury Villas & Chateaux in Brittany, near beach with a private heated pool.

Read more about Beaches, and things to do and learn about Art, history, Culture, Nature, Wine, and Food in Brittany.

Brittany’s beaches are for everyone, whether you want to put up a sandcastle, take a sailing boat trip to sight dolphins, paddle board, sea kayak, dive or surf, Brittany has much to offer. Apart from the beaches, visit the Saint-Malo port city, Limoëlou Manor, former residence of the famous explorer Jacques Cartier. See if you can make it to the festival La Route du Rock, take a guided tour of Château de Montmuran, between Rennes and Dinan, is a place full of history. In Saint-Malo, you will soon discover that it is a place for the foodies, Breton‘s Cancale is renowned for its oysters – the best scallops in Brittany are from the bay of St Brieuc.

Explore Brittany, rent a chateau in Brittany, stay in a beach house or ask our team for tips for your Brittany villa Holiday.

See our collection of Holiday Villas in Burgundy with pool and sights.

If you searching for luxury villas in France to rent in the wine regions, then burgundy  is probably one of the best wine regions to explore. Burgundy is famed as the world’s best destination for wine lovers. There’s more to rediscover here than tasting wine. With access to more than 30 stunning villas in Burgundy region, we are sure to pick your beautiful Burgundian villa Holiday based on your interests.

This wine region has some wonderful sightseeing too, travel on a Burgundian canal barge, explore a feudal hospice and a contemporary monastery, taste the fine Burgundy wine, try escargot, bon appétit… !! If typical French culture you are after, then look no further: you have arrived at the right place, you’ll find it in Burgundy.

After exploring, wind up in your Private Villa by the pool in Burgundy and end the day with French dining and Burgundian wine. This should be an ideal Burgundian villa holiday you dreamed of.

Luxury villas and chateaux rentals in Loire Valley & things to do

Experience The Loire River Valley of France. See the distinctively different Chateaux and other things to do.

This is France’s Château region and here you will find some excellent choice of luxury villas in France for rent. Beside the Loire River Valley, the stunning French countryside is dotted with reminiscent châteaux. Amboise, Angers, Blois, Chinon, Montsoreau, Orléans, Saumur and Tours, including Nantes and Saint-Nazaire, all add to the splendour of the valley. The Chateaux are the best luxury villas in France for rentals.

Experience the Chateaux & Villas to rent in Loire valley by Staying in your private Castle, explore some distinctively different castles such as The Famous and the biggest – Château de Chambord, Italian renaissance influenced – Château d’Amboise,Château d’Amboise the famous royal residence of numerous kings, Chateau of the ladies – Château de Chenonceau, Five century of rule and up to date –  Château de Cheverny and Château de Villandry – Jean le Breton inspired Gardeners Paradise are to name a few. Visit Leonardo’s home, take a peek at the feed of hunting dogs, enjoy the local cuisine, and savor a princely garden.

Other things to see or do in Loire River Valley: Meander the Terra Botanica Garden in Angers,check out the Circuit des 24 Heures du Mans, go on the wine trail in an exploration of its delicate essences, partake in some wine tasting at Bouvet-Ladubay, cycle the bends of Loire or if you are with your family, try Malagué Lake activities and Swimming and take a ride with hot air balloon and watch the Châteaux from the air.

Stay in the Garden of France with one of our luxury villas in the Loire Valley, surrounded by vineyards and acres of orchards.

Villas in South of France & Provence

Experience the seaside living of the French Riviera and discover the history of this little paradise and see what things to do on your holiday.

While the French Riviera, (Côte d’Azur) is famous for its beaches, it doesn’t lack from some interesting sites to visit. Best way to explore the area is to rent a villa in French Riviera | Cote D’Azur. Nice is a good start point, with its ever pleasurable seafront esplanade and fine museums. Race over to Monaco (Monaco is a sovereign city-state, country), where it draws the attention of some Rich and famous, who seek to live a spendthrift, lavish and dreamy lifestyle. This extremely rich city is well known for its upscale casinos, yacht-lined harbor, and the famous Grand Prix of Monaco. Get up and speed up to Monaco, Every May, the Grand Prix of Monaco takes the interest of F1 Lovers around the world. A perfect excuse for yacht parties and restaurant binges, you are sure to pay more during this episode, hotel tariffs rocket up (even for cheapest of places).

After Monaco, Visit Cannes and wind up in Antibes. While in Nice, don’t miss Nice’s Russian Cathedral, if you are a Chagall fan then can’t-miss treat is the Chagall Museum.

Matisse Museum gives a picture of the works from various periods of Henri Matisse. Picasso Museum is a compacted three-floor museum offers some of Picasso’s paintings and ceramics. He lived in this castle for four months in 1946. The artist Françoise Gilot just 21, met him in 1943 and eventually moved to live with him and had two children. Visit the beautiful Villa Ephrussi de Rothschild Rising above Cap Ferrat, with its views west to Villefranche-sur-Mer and east to Beaulieu-sur-Mer. Also worth a visit is Le Trophée des Alpes (the ancient Roman “Trophy of the Alps” for the emperor who built it). Cannes, Famed for international film festivals, has been hosting film festival annually since 1946, it is packed with film producers, famous actors, celebrities and paparazzi. With select high-end hotels with mostly private stretches of sandy beach, it is a place for strolling and fantasising of meeting a movie star and relaxing on the seafront.

Luxury villas in Provence to rent

Provence is any traveller’s dream, a region in southeastern France bordering Italy, offers top-quality travel experiences. Be astonished at the Picturesque landscapes & acres of lavender, Enjoy Strolls in rolling vineyards, pick olives or learn about planting, harvesting and making olive oil, see the Camargue plains in the south of Arles, learn the influence of Greek and Roman History,  and see the difference in the culture here. To the south is the Côte d’Azur (or French Riviera).

More to discover during your stay in Provence are Marseille, explore France’s oldest city founded in 600 BC by the Greeks, rediscover the Roman ruins in Nîmes (not to miss – Pont du Gard), Century-old French Noblemen’s classy residences, museums and ruins of Aix-en-Provence, See a 14th century the Catholic Church-run papal palace and a broken bridge in Avignon, and learn about the famous Dutchman who lived here in 1888 and discovered Light in Arles; Vincent Van Gogh. Get ready to try the local markets and taste the Côtes du Rhône wines and more wonders of Provence by staying in a Villa in Provence with a pool.

For some villa Holidaymakers to Bordeaux, it’s not about what to see and do, but rather what to eat and which wine to taste. Be it, St. Emilion or St Estephe, they are both one of the fine French wines from Bordeaux. Bordeaux is a region not just famed for its wines but also for its gastronomic scene and architecture. After 2007, Bordeaux woke up to the new Era, making its great vibrant city to explore for Culture lovers.

Villas in Dordogne and Midi-Pyrenees & 10 things to see & do

Dordogne is celebrated for its love of food and drink – and brags a long culinary culture. Located between the Loire Valley and Pyrenees mountains, this idyllic lifestyle of Dordogne has always captured the attention of Brits. The Valley with its magnificent chateaux, prehistoric cave paintings in the Vézère Valley, Vesunna Museum, Local French cuisine, a Rural Countryside with vineyards, and rivers makes a great base to explore the Southwest of France.

Rent a Private house or villa in Dordogne with a pool, its the best way to feel at home and explore the region, relax enjoying the best cuisines from the region prepared by local chefs.

France has mastered the art of food and wine pairing like no other. Try the world’s most mouthwatering food and wine destination — and learn how to prepare, and go home and impress your family and friends .